Firstly this post is going up a day late as it took me longer than i though to get the blog set up to how i wanted it, but this is the type of post you can expect on Friday’s at 5.00pm.

So i decided my first film related post would be a Netflix recommendation post. As you see I am a Netflix addict! There I said it, i’ll put my hands up, I am constantly watching something wither it would be on my app on the iPad or TV or even on the computer. But that is good news for you as I can now share my recommendations for this month. I’m sure most of you who have Netflix will know the struggle of trying to find something to what to watch when there is so many options. So hopefully this post will make life a little bit easier for you.

I have found over the past couple of months that Netflix seem to be focusing more on TV show as there is a bigger selection to choose from. Due to this i have found that less movies have been added this month so some of the movies i’m about to recommend may have been added in April.

I do love a watching a chick flick, but this one is the best one have seen in a long time. One thing I love about this movie is it isn’t overly girly and it isn’t all about having to look a certain way to get the guy, and it doesn’t have a over the top storyline either. It stars Felicity Jones and Ed Westwick, where one is the catering girl working in a chalet in the alps and the other is the billionaire’s son who lives in chalet, i’ll leave it to you to guess which one is which. This is just such a feel good movie, with a few cheesy British comedy scenes to enjoy, and of course Ed’s gorgeous face for two hours. This movie is a good movie for a night in.

This movie is such a beautiful and inspiring story. It follows the true story of Bethany Hamilton, a pro surfer from Hawaii. She is portrayed by AnnaSophia Robb manages to capture the strength and raw emotion of Bethany and her story. Another great thing about this movie is that some of the scenes are recreations of the Hamiltons home videos that were filmed around that time, it really helps to show the family’s connections during the time. This is a bit of a tearful movie so you will probably need your tissues but it’s definitely a movie you need to watch. 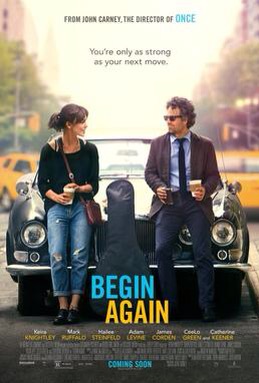 When I originally heard about this movie I didn’t really know what to make of it from watching the trailer. I was actually not going to watch this movie because it didn’t look like my type of movie and I’m not a huge fan of Keira Knightley. But I had a night in with my sister and we decided to watch it, which I’m glad we did as it was a surprisingly good. Not only does it star Keira Knightley but also Avengers star Mark Ruffalo, Maroon 5 frontman Adam Levine and comedian James Cordon. This a musical comedy and directed by the director of Once and has a very similar feel. The story follows Keira’s character who takes the opportunity to record an album, which brings some catchy songs into the mix, including Adam’s songs ‘Lost Stars.’ Overall it’s worth a watch but may not be everybody’s cup of tea.

This was an interesting movie, it wasn’t a terrible movie but I found it quite confusing at times, it kept jumping back and forward, so if you don’t like this type of movie then stay away. This movie stars Vanessa Hudgens, Ashley Benson, Selena Gomez and James Franco. This is a crime drama and follows the story of four girls who, by any means necessary, go on spring break and end up getting involved with a drug gang. Overall it’s a good watch but it’s the type of movie you would watch once.

Next up are some TV shows.

Stop what you are doing and start watching this!!! It’s amazing, funny, and all things Disney. AND all four seasons are on Netflix which makes it so much better. That’s all!!

First of all I want to warn you that this TV show is very different to the movies and Agents of S.H.I.E.L.D so if you are expecting mentions and appearances from your favourite Marvel characters, think again. The show is also has a different pace to the movies, they focus more on the character and story development which I really like although it does make it a bit slow at times. There is a few action scenes where you see the development of the alter ego Daredevil. I must also warn you that they are much more violent and gory than the movies. Even though it ended up not being what I expected, I am enjoying it and I’m also looking forward to seeing how it will develop.

Well that’s my recommendations, I hope you like them and if you’ve seen any of them let me know what you think

I’ll be back in June with more recommendations